International Day for the Fight against IUU fishing: CCAMLR’s protection of the waters surrounding Antarctica

In recognition of the United Nations Food and Agriculture Organization’s (FAO) Declaration of 5 June as the International Day for the Fight against Illegal, Unreported and Unregulated (IUU) Fishing, CCAMLR joins the global fisheries community in drawing attention to the threats posed by IUU fishing activities.

In the 1990s, faced with growing IUU fishing for toothfish, CCAMLR took action to confront and combat this far-reaching issue:

Collectively, these initiatives have contributed to a significant overall decline in IUU fishing vessels sighted in the Convention Area since 2002 (See Figure 1) but the Commission remains vigilant to any suspected IUU fishing activity which may undermine CCAMLR’s conservation objectives.

The lessons learned by CCAMLR in combating IUU fishing, and in its application of a precautionary ecosystem-based management approach, have been successfully employed globally across the oceans in the global fight against IUU fishing activities.

Above: the decline in IUU fishing for toothfish in the CAMLR Convention Area resulting from Commission actions.  Below: an image of the STS-50 (Ex. Aida, Seabreeze, Andrey Dolgov), a CCAMLR IUU listed vessel, which was apprehended in 2018 following a multinational response including Interpol and was found to carry 600 gillnets on board. Gillnets have been prohibited by CCAMLR since 2006. 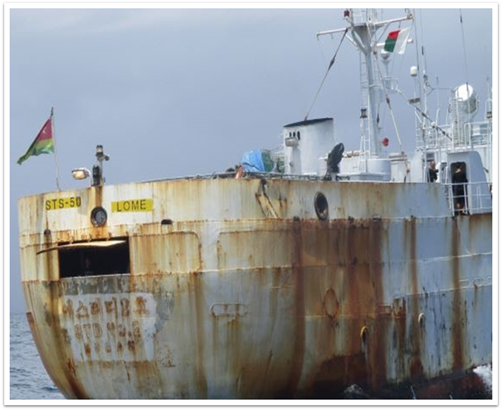 Further information on CCAMLR’s actions to eliminate IUU fishing activities can be found in our Brochure and Blog and on our website.