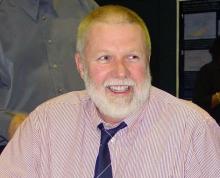 It is with great sadness that we learned about the death of Professor Denzil Miller AM on Saturday 30 November 2019 at his home in Tasmania. Denzil played a central role in Antarctic affairs for over forty years and his unparalleled contribution to CCAMLR included being Convener of WG-Krill, representing South Africa at both the Scientific Committee and Commission, as Chair of the Scientific Committee and Executive Secretary from 2002 to 2010.

He was awarded the South African Antarctic Medal (1995), the Duke of Edinburgh Conservation Medal (2007) and was inaugurated as a Member of the Order of Australia (2011) for work in Antarctic and marine conservation.

Denzil’s passing leaves a very large hole in the landscape of Antarctic conservation and he will be remembered by all as a friend, colleague, facilitator, mentor, raconteur and larger-than-life unique character at meetings and places all around the world.

He is survived by his wife Jenny, daughters Robyn and Hannah, son Richard and seven delightful grandchildren.

Messages of condolence can be sent to ccamlr [at] ccamlr [dot] org and the Secretariat will compile and convey them to the Miller family.

There will be a Celebration of the Life of Denzil Miller at 3pm on 12 December at the CCAMLR Headquarters, 181 Macquarie Street, Hobart (arrival from 2:30 pm, event starts at 3 pm). The family have established a Legacy for D in lieu of flowers.