CCAMLR’s 35th annual meeting – more than the creation of the world’s largest MPA! 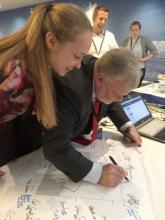 CCAMLR’s annual meetings in Hobart have concluded for another year. And what a year it was. The 35th annual meeting of the Commission for the Conservation of Antarctic Marine Living Resources and its Scientific Committee produced some exciting outcomes.

The headline outcome was that Members established a 1.55 million km2 area of the Ross Sea as a marine protected area (MPA). This will become the world’s largest MPA.

This MPA proposal has been under discussion for at least 5 years. To enter into force in December 2017, it will include a 'no-take' zone (72% of the total area) which forbids all fishing. Other sections of the MPA will permit some harvesting of fish and krill for scientific research which will, among other objectives, be targeted to the monitoring of changes in the ecosystem that may be ascribed to fishing, climate change, or both.

The result of much hard work on the part of its proponents, New Zealand and the USA, across five years of complex negotiations, the Ross Sea MPA will become the second high-seas MPA in the CAMLR Convention Area. The first, established in 2009, was the South Orkney Islands southern shelf MPA which covers an area of 94 000 km2 in the South Atlantic.

Although the Ross Sea MPA grabbed global headlines, it wasn’t the only important outcome from the meetings. Another issue up for discussion in 2016 was conservation measures for krill fisheries. The Commission endorsed a phased increase in observer coverage for the krill fishery to achieve 100% observer coverage by 2020/21.

The regulatory measure which sets the interim trigger level in the krill fishery in Subareas 48.1, 48.2, 48.3 and 48.4 was due to expire at the end of this current fishing season (30 November 2016). It has now been extended for another five years, with no change to the distribution of the precautionary catch limits, allowing further research in the fishery. Research will focus on data required to assess the risks to krill-dependent predator colonies that may be associated with krill fisheries.

The Scientific Committee discussed the complexities and unpredictable nature of ice-shelf collapse and clarified definitions of collapse. The Commission welcomed these clarifications and adopted a new measure which establishes time-limited Special Areas for Scientific Study in newly exposed marine areas following ice-shelf retreat or collapse around the Antarctic Peninsula.

Fishing industry bodies have long been constructive contributors to CCAMLR, and this year there were formal offers of further engagement with CCAMLR to collaborate with researchers. Industry initiatives are aiming to maintain sustainable fisheries both inside the Convention Area and in adjacent waters. Examples of this included ongoing support for a tag recapture program for toothfish by the Coalition of Legal Toothfish Operators (COLTO) and a voluntary undertaking by members of the Association of Responsible Krill harvesting companies (ARK) to avoid fishing in areas that pose elevated risks to penguin colonies in Subarea 48.1.

The Commission also endorsed a proposal by the EU to undertake a second performance review (the first was undertaken in 2008), agreed to extend the Compliance Evaluation Procedure from an initial suite of 13 conservation measures subject to annual evaluation to all conservation measures in force and renewed ongoing efforts to eliminate illegal, unreported and unregulated (IUU) fishing from the Convention Area, including through ongoing efforts to engage non-Contracting Parties in CCAMLR’s Catch Documentation Scheme (CDS) for toothfish through an outreach strategy.

At the conclusion of the 2016 meeting, the chairmanship of the Commission was transferred from the Russian Federation to South Africa. This year’s chair, Vasily Titushkin, described CCAMLR-XXXV as a historically significant meeting that solidifies CCAMLR as a leading organisation for international collaboration on conservation and sustainable fisheries management.