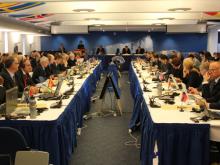 After four weeks, the 34th annual Meetings of CCAMLR in Hobart have come to a close. Beginning with the working group on Fish Stock Assessment, moving on to the Scientific Committee and concluding with the Meeting of the Commission, delegates have worked their way through an exhaustive agenda.

Highlights of this year's meetings include:

The world's media have focussed on the discussions of Marine Protected Areas (MPAs), with two major proposals before the Commission. Proposals for MPAs in East Antarctica and the Ross Sea Region were examined and their merits evaluated according to various criteria.

Each of these proposals have evolved over the past few years as proponents incorporate feedback from other Members. This year the Ross Sea Region proposal, which was amended to include a krill and an expanded special research zone, gained further support from Members. Proponents of both proposals will continue discussions over the next 12 months and the proposals will likely be back on the agenda for the annual meeting in 2016.

Now that the 240 delegates have left CCAMLR Headquarters to return to homes in their respective corners of the globe, staff of the Secretariat are compiling the preliminary reports in the four official languages of the Commission. These reports will be publicly available on the CCAMLR website in early to mid November.