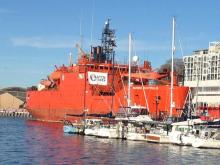 The 35th Antarctic Treaty Consultative Meeting (ATCM XXXV) and the 15th Meeting of the Committee for Environmental Protection (CEP XV) were hosted by Australia and concluded in Hobart on 20 June 2012. More than 250 representatives from the Antarctic Treaty Parties, experts and observers from all around the world attended, including CCAMLR.

The ATCM is the premier international forum on Antarctica through which Antarctic Treaty Parties annually come together to discuss and decide on measures to realise their vision for Antarctica as a natural reserve devoted to peace and science. Scientists expressed concern about marine life in the Southern Ocean as early as the 1970s, and as a consequence the Antarctic Treaty Consultative Parties initiated negotiations resulting in CCAMLR, formed in 1981 by 15 nations from around the world.

For the first time the meeting was held over eight days, as opposed to the normal 10 days. The general consensus was that this was successful. The key issues discussed included safety and operations in the Antarctic, including in relation to fishing vessels, area protection and management plans, including areas with a marine component, tourism, jurisdiction in Antarctica, information exchange, climate change, environmental impact assessment associated with bases and related activities, non-native species introductions, a multi-year work plan and operations of the Antarctic Treaty Secretariat. Next year’s meetings will be hosted by Belgium in May.